John Leonard Riddell (1807-1865) completed a bachelor's degree at Rensellaer Academy and was later granted a master's for his field work in botany. He earned doctorates in medicine from the Ohio Reformed Medical College (1834) and from the Medical College of Ohio (1836). He taught chemistry at the University of Louisiana (1839-1865) while at the same time he served as chief melter at the New Orleans Mint (1839-1848). Though loyal to the Union, he was the postmaster at New Orleans during the Confederacy. 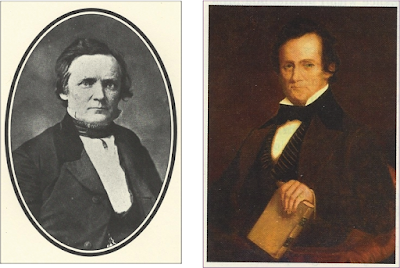 “Marine and lacustrine beds of marly earth, formed unknown ages ago, are often met with, which, under the microscope, prove to consist, sometimes, wholly of the sileceous shells of diatomaceous animalcules, frequently bearing a precise resemblance to the living forms which now abound in all our stagnant waters.  But in the more conspicuous fossil remains occurring in the geological strata of different ages, important modifications of structure are apparent; certain species of animals and plants prevailing for a while, becoming extinct, and being succeeded by others of a modified type.

“Without unduly dwelling upon this subject, it is worthy to be remarked, that at least one great lesson may be learned from the study of these organic remains; especially from contemplating those of the more highly organized types, namely: That as we, in the brief day of our actual observation, have seen organic individuals begin and end their respective lives; organic varieties, as of fruit, &c., appear, flourish, and decay; and even organic species to become extinct, as the Dodo and the Irish Elk; so may we infer, from the inspection of the remains of successive extinct races of beings, that all species or kinds, as such, have begun their career, will flourish for, we know not how long, and will ultimately decay and disappear; their places to be supplied by modified species and kinds.

"The observed average duration of individual beings varies, from a few hours, as is exemplified in the minute world of life revealed by the microscope,--as in the Vorticella ramose, different species of Mucor, &c.,--to a few centuries, as is inferred to be exemplified in whales, elephants and forest trees. What naturalists call varieties, possess a duration extending, more or less well marked, through, perhaps four or five generations of individuals. Species, so called, have a much longer life. Concerning the average duration of species, nothing very reliable is known; perhaps a thousand successive individual generations might retain to the last, the essential specific characteristics. To pursue this subject further, by attempting to conjecture the duration of organic races and natural orders, would be profitless, inasmuch as mere conjecture would alone provide  us foundation to build upon. Nevertheless, a careful study of the organic remains which geological researches have brought to light, give strong color of truth to the general conclusion, that all organic matter is in a state of continued change; the progress of which, though often too slow for our direct appreciation, is, in the limitless flight of long successive ages, not the less certain.”

J. L. Riddell, M.D., Professor of Chemistry, Introductory Lecture, Delivered on November 18th, 1851, Before the Medical Class, University of Louisiana, New Orleans, “On Our Knowledge of Nature, the Natural Sciences, and certain Truths revealed by the Microscope.”