Sacred Silver from the Roof of the World: Tibetan Tangkas

Virtually devoid of natural resources, the wealth of stemmed from providing hospitality to pilgrims and other travelers.

Tibetan tangkas were minted from 1792 to 1948. They exhibit a wide array of varieties and yet maintain a consistent fabric and type. Generally, they are thinner than modern coins, and about 2.5 cm (1 inch) in diameter.  Early examples were hammered. Later coins were struck by machines. The tangkas that make their way to the Western collector usually were minted between 1900 and 1924. The commonest of these can be had today for $5 or $10, though some rarer varieties fetch $100 or more. A few are so rare that the catalogs give no price for them.

The first Tibetan tangkas were struck in 1772. They followed the Nepalese fabric and type with minor differences to assert their local origins. The briefly reclaimed their prerogatives, but their debased coins were extremely unpopular. sent help to in its war against ; and the Chinese stayed on afterwards. The sho is a coin that was issued with Chinese and Tibetan legends from 1792 to 1820. In fact, like the tangka, the sho is very close in style and weight to the Nepalese mohur, itself a local variety of the Indian rupee.

At first, the Tibetan tangkas remained nearly invariable for several decades. Cataloguer Eduard Kann identified five different types based on details of design, but all bear the same date, regardless of when they were actually struck. (This is called a “frozen date” in numismatics.) Colin Bruce II told me that while editing the Krause Standard Catalog of World Coins he devoted a lot of energy to . He cited two Kong-par tangkas that are dated 13-46 and 13-47 (1792 and 1793 AD) and which were struck into the 1820s and 1860s.  The Kong-par tangka preserved a very old fabric and some issues have the “Lansa” (or “Lant-sha”) holy script which has yet to be deciphered as it is written on coins.

The Ga-den tangka dates from about 1850 and it is the one you are mostly likely to find, especially from its later years. Thirteen major varieties have been catalogued. In all, there are at least 37 known minor varieties, but possibly 50 or more that could be noted.

Six mints have issued tangkas in volume: Dodpal; Giamda; Dode; the Tip Arsenal; Ser-Khang; and Tapchi. (One issue from the Lhasa Mint is known, from 1792, and it is listed as rare.) Differences in type and fabric are minor and there are no mintmarks.

The obverse shows eight lucky symbols from the lore of Lhasa Buddhism:
These are usually arrayed around a central lotus. Their actual order and specific designs vary over time. Many differences are recognized as varieties by different cataloguers. 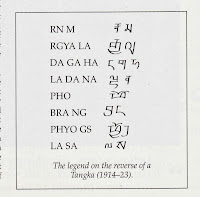 The two sides of the coin have the same orientation. To read the reverse, rotate the coin about its vertical axis. Starting from the top, the reverse says: RNAM RGYA-LA DGAH LDAN PHO BRANG PHYOGS LAS. Literally, this means: “In the Cycle, direction from.” Or, as Eduard Kann rendered it: “In the year (year) from the .” The legend is written in such a way as to fit into eight circles. These are actually derived from an earlier style in which the characters were inside lotus petals.

In 1949, invaded . In 1958 the communist Cultural Revolution closed temples, outlawed Buddhism and executed monks. Today, the Dalai Lama is in exile. However, totalitarianism is a wholly urban phenomenon and is hardly an urban society. The Nepalese and various Chinese warlords have often impressed themselves on the town of and its environs. The British staged a bloody but pointless foray in 1904. Though has modernized parts of , even today, in a climate as cold as the Hebrides and as dry as the , the men sleep outdoors under animal skins, giving the tents to the women and children. Conquerors come and go.

(This was based on an article that I wrote for Coin News, Devon, UK, January 1996. An abbreviated version was posted for several years on the Coin Newbies website.)