F. A. Hayek's Denationalisation of Money (1978) made a case for an open market in money, without legal tender laws, and without a government monopoly in currency.


Hayek's thesis is two-fold.  First, that a competitive market in money will create currencies that are desirable for their enduring value.  Good money drives bad money from an open market.  Second, more broadly, until we have that happy day, we really cannot say what forms and formats will be acceptable or popular. 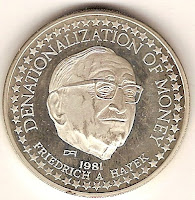 Breaking with tradition, Hayek stated that being limited to gold ("the wobbly anchor") is contrary to a truly free market.  Liberated from state control, there is no limit to the forms that money can take.  Hayek even suggested that a truly free market might see stable paper money backed by nothing but the credit of the issuer.  Paper money from one bank might promise payment in the paper of other banks.  Still other possibilities exist.

It is easy see that if a bank issued too many notes then it would soon be redeeming them as a result of financial reporting. That is history.  For Hayek the more interesting problem was what to do when the market value of a bank's paper exceeds its issue price.

"... but it could preserve this business only if it did in fact promptly buy at the current rate any of its notes offered to it.  So long as it succeeded in maintaining the real value of its notes, it would never be called upon to buy back more than a fraction of the outstanding circulation.  Probably no would doubt that an art dealer who owns the plates of the engravings of a famous artist could, so long as his works remained in fashion, maintain the market value of these engravings by judiciously selling and buying, even though he could never buy up all the existing prints." (Page 49)

This little book is dense with worthy ideas such as that. Most economists express three uses for money. Hayek defined four: cash purchases; reserves for future purchases; standard of deferred payment; unit of account.

F. A. Hayek apparently had little or no experience with numismatics.  Many of his theoretical claims are supported by facts known to those of us who study the art and science of the forms and uses of money. Other of his theoretical assertions are denied by the facts of history. And to be fair, numismatists, schooled in economics by publicly-funded (or aristocratic) institutions, also err when narrating the history of money.  The idea that coins were invented by merchants to make bullion more convenient for retail trade is the best example of such error.  Charles Seltman, the British numismatist who promoted that silly idea via the Encyclopedia Britannica, never worked behind a retail sales counter.   Similarly,  for all their theoretical knowledge Hayek and the other Austrians had no experience as merchants. 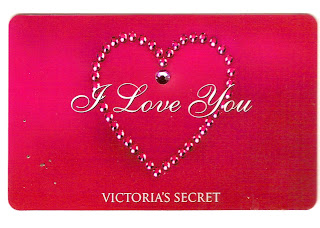 Hayek says that it is unfortunate that there existed no complete history of the experience of government monopoly on money.  However, he does cite Murray N. Rothbard's monograph, What Has Government Done to Our Money (1963, 1974).  That work is little more than a sketch.  Like Hayek, Rothbard had little involvement with the artifacts.  Rothbard relied on "The Use of Private Tokens for Money in the United States," by B. W. Barnard from The Quarterly Journal of Economics, Vol. 31, No. 4 (Aug., 1917).  That academic paper reported all known issues without regard to their actual use.  Today, Bar Cents and Immune Columbia are regarded as rare and likely saw little use in their time.  Nova Constellatio tokens really did circulate.  In short, Rothbard's data was flawed because he gave weight to an academic paper instead of going to numismatists.  Any active collector of American money could have shown him (and Hayek), the material evidence they sought to support their theories.

"The early Middle Ages may have been a period of deflation that contributed to the economic decline of the whole of Europe. ... But where, as in Northern Italy, trade revived early, we find at once all the little princes vying with one another in diminishing the coin - a process which in spite of some unsuccessful attempts of private merchants to provide a better medium of exchange, lasted throughout the following centuries until Italy came to be described as the worst money and the best writers on money." (page 34)

Yet this complaint - common among historians and cited by gold bugs - ignores one of the arguments for gold-based money: with the quantity fixed by nature, each new invention, import, or innovation caused the existing money to increase in value: hard money is worth ever more over time.  That was the case in the Middle Ages as expanding trade brought more products to market.  It is also true that warlords and generals debased their coins, a common cheat in both Roman and modern times, as well.  But that negative motivation was only part of the story.  Absent new discoveries such as the mines of Joachimstal and the looting of the Americas, deflation is a beneficial consequence of hard money.   Moreover, some strong currencies, such as the English sterling penny and the Venetian gold ducat, enjoyed international reputations.  That meant, however, that they left one place and went to another.  For a local ruler to keep his coins in his realm, the issues had to be useful only locally, otherwise the locale would quickly enjoy an influx of imported goods and a loss of currency.

One solution to that is a token currency. The strength of a monetary medium, itself durable and cheap, but also a token for precious metals that do not pass hand to hand was explored by Neil Carothers in Fractional Money (New York, J. Wiley & Sons, 1930), a book that grew out of his doctoral dissertation some years earlier.  Again this data is a century old.  We know these facts; and they support Hayek's theories. 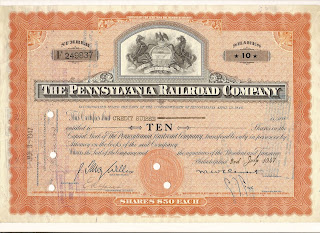 We can see an analogy to Hayek's laissez faire banking via the stock market.  Common stock certificates are a form of money; and historically their format resembled  bank drafts, being only much larger in size.  Stock certificates were issued, endorsed, transferred, and cancelled.  With or without a declared par value their worth fluctuated on the open market.

Knowing Hayek's theory you are perfectly free to use whatever moneys you prefer.  If you live in the USA, you will find Federal Reserve Notes most liquid.  But all manner of moneys are in circulation here and now, if you only know where to look for them.

Numismatics Informs Economics
Debt: the Seed of Civilization
Numismatics: the Standard of Proof in Economics
Objectivism and the Gold Standard
Money as a Crusoe Concept
Electronic Money: Coins without Realms